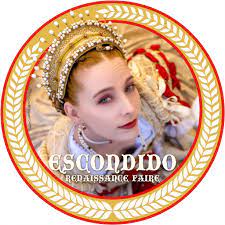 The Escondido Renaissance Faire is a lovely little event held in Felicita Park in Escondido, California. As most of you know, I am based in So Cal, and I like to try to get to this event when I can.

I asked for a small set-up, just a couple of tables and a place for my Celtic Art. They gave me a place under a shade tree near the King Richard’s Tavern and across from Tasty Tarts (don’t cake and drive!), and I put out my work for all to see.

Escondido 2022 was the first appearance of the full set of Tales of the Ravensdaughter. The first week, I had Books 1-5 available, but Book 6 came in the Friday before the last weekend, and I was really jazzed to have the full set available for readers to enjoy.

As might be expected, several new readers only wished to try the first book. Makes sense. I like to try a sample before committing to a full purchase as well, and I happily “talked up” the first adventure, The Beast of Basque.

The one selling point, which I was happy to share was the fact that I’ve written one of the best gender-fluid characters into this fantasy novella series. This is my character Oddwyn, who is based on Shakespeare’s Puck. Oddwyn will present as a teen male, then change to a maiden to blow a kiss, then back into a guy to crack a joke.

I met a couple folks who could easily cosplay Oddwyn, and I hope they might one day.

I also met readers who just loved chatting with me, and shared in the energy I brought to the conversation. These folks were avid readers, and they trusted that I was about to take them on a fun adventure. They bought the full series, and a few have been telling me how much they are enjoying it (it’s 2 days after the show as I write this blog).

Some people also bought my novel, Gray Warrior, and I was so very pleased when folks decided to go for broke and pick up copies of all my written work! Then, there’s the Wild… I have nothing but love for this guild of ash-and-black barbarians who entertain guests at several renaissance festivals. One of their best bits is called Fight for the Bone, and if you haven’t seen it, you really should!

When I was creating Tales of the Ravensdaughter, I reached out to Jamie Farthing – Queeny – who is the guild mistress. I originally thought my heroine might be a member of the Wild – or the Wyld, as I call them. While I went in a different direction with my main character, the Wild Collective was such a fun bunch that I had to feature them in the third adventure, The Wizard and the Wyld.

Of all the Wild, there’s one character who really stands out – except for Queeny of course. His name is Mutt, and his look is so distinctive that I had to give him a great place in my novella. Mutt also makes a brief appearance in the sixth adventure, The Raven’s Daughter.

One lady bought a copy of The Wizard and the Wyld, and apparently went over to the Wild Collective to have Mutt sign it. She returned with a make-up stained book and showed it to me. Apparently, Mutt had taken the book, opened it to the blank pages in the back and smashed his face right into it! Yep, that’s Mutt! So this wraps up the Fall Escondido Renaissance Faire 2022. I don’t know if I will be able to come back to this show for 2023 due to scheduling issues, but I sure had a fun time this year.

Thanks to everyone, and find me on social media!